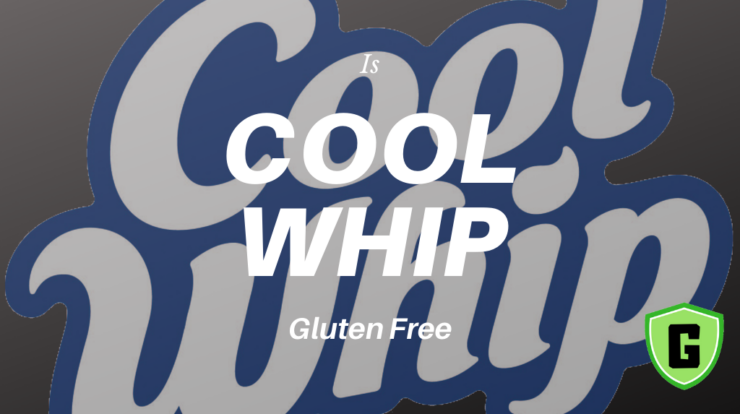 Is Cool Whip gluten free? YES, it is gluten free, but if you want to learn more, read below.

Gluten is a protein found in grains like wheat, rye, or barley. Thus, food items that consist of these gluten-rich ingredients are unhealthy to consume.

To understand Cool Whip in a better way, think about whipped cream. Cool Whip is just a reproduction of the latter. It’s manufactured by Kraft Heinz, its owner under the company name “Kraft.”

Cool Whip is also known as whipping topping as it is mostly used in North America as a popular dessert topping since it’s slightly sweet in taste. However, iCool Whip also uses several other bakery items like pies, cakes, bread, puddings, etc.

People go for the whipping topping over the former whipped cream to maintain its texture and state. In addition, you don’t need to whip it before use. Instead, you have to store it in the freezer, defrost it in the refrigerator, and it’s ready to use.

That’s the reason why its shelf-life is higher than your usual whipped cream. But, unfortunately, this also makes it cost around 50% higher per ounce than normal cream.

While some food items have a marking of “gluten free” or “contains gluten,” others don’t have either of these.

Cool Whip falls in the latter category. Thus, the only way to know whether Cool Whip is gluten free or not is by looking at its ingredients.

As you know, none of the above ingredients contains gluten; this shows that Cool Whip is in fact gluten free.

However, with several other varieties of Cool Whip available in the market that may contain any gluten-rich product, you should always check their ingredients.  Although in the majority of the cases, it’s always gluten free.

Here comes the most important topic – Cool Whip v/s whipped cream. Be it Cool Whip or whipped cream; the cream is the key ingredient in both and the base of both.

The cream is so versatile that it is commonly used in several dishes, from cakes to puddings and from an accompaniment to the star ingredient.

With both Cool Whip and whipped cream highly accessible to everyone in the market, people often get confused between the two. However, there are many reasons behind the same.

For example, both have identical textures and colors, with cream being the common ingredient. Still, there are a wide number of differences between these two. Knowing them is the only way to determine which one to pick from the grocery store.

So, let’s see which is better – Cool Whip or whipped cream...

Note that the higher the milk fat percentage, the better the whipped cream will hold up its texture and shape.

On the other hand, Cool Whip is a mixture of high fructose corn syrup, vegetable oil, skim milk, and light cream. The vegetable oil is mainly put into Cool Whip for stability and longer shelf life out of these ingredients.

Another thing to note here is that Cool Whip is slightly sweeter due to the addition of corn syrup. However, it adds a unique taste to your desserts.

The texture is another noticeable difference you can make out between the two. While whipped cream is light, airy, and fluffy in texture, Cool Whip is heavy and a sort of solid whipped cream as it’s stored in a freezer.

To understand the texture of Cool Whip in a better way, it’s somewhat like that between sour cream and cream cheese.

Also, whipped cream is denser due to the high air, while whipping topping hardly has any air inside it.

You can add several flavors to both whipped cream and Cool Whip to enhance their plain taste. To do so with whipped cream, always use the confectioner’s sugar as it easily dissolves into the cream.

Note that some varieties of whipped cream already contain confectioner’s sugar and thus are sweeter.

On the other hand, Cool Whip’s sweetness is mainly due to natural and artificial flavorings. These include sodium caseinate, xanthan & guar gums, and Polysorbate 60.

Another parameter that separates whipped cream from Cool Whip is the level of sweetness in both.

While the original whipped cream is sugar-free and its other varieties also contain less sugar, it isn’t true with Cool Whip.

Cool Whip is very sweet due to its high fructose corn syrup concentration. Unfortunately, this also makes it slightly unhealthy in comparison to whipped cream.

Still, it’s this high sweetness that completely enhances the taste of your desserts or meals.

When both share nearly similar texture and taste, the price difference has the final say. So, let’s see which of the two – whipped cream or Cool Whip, is cheaper. Whipped cream is much cheaper than Cool Whip due to the heavy use of artificial flavors in the latter.

So, these are the major differences between whipped cream & Cool Whip. There is no clear winner between the two as both are good at their places.

Is Cool Whip healthy or not?

Is Cool Whip healthy or not is another common question people usually feel before buying or trying it. As a short answer, Cool Whip is good for consumption but only in moderation.

This is because of its contents like high fructose corn syrup and hydrogenated fat. Since both these are highly unhealthy, you’d not consume Cool Whip like you’d consume its healthier alternative whipped cream.

Thus, always consume Cool Whip in moderation to keep yourself safe from side effects like high cholesterol, obesity, and even cancer.

Some cool recipes from Cool Whip

Like whipped cream, you can use Cool Whip in tons of dishes, mainly desserts with minimum ingredients. Some of the easiest and quickest Cool Whip recipes are:

#1 Food for Gods or the Ambrosia salad

If you are into fitness and can’t consume desserts now and then, try the quick ambrosia salad and satisfy your sweet cravings. It contains fruit chunks (pineapple, apple, mango, etc.), marshmallows, shredded coconut, and Cool Whip.

The ingredients might sound strange, but the combination tastes so good. You can further enhance the taste through dry fruits and some hot chocolate on the top.

After seeing the final result, you may not believe it is a salad in any sense, but that’s how it’s called. Peanut butter salad contains raw peanut butter, cream cheese, Cool Whip, milk, and chocolate chips (brown or white).

Since all the above ingredients are mostly sweet, you can change the quantity of milk to balance the sweetness.

Can you imagine an amazing dessert using only three ingredients? If not, these Cool Whip cookies are for you.

To make these delicious cookies, you need just cookie dough ( gluten free one obviously ), Cool Whip, and an egg. Then, prepare a thick batter combining all three ingredients, and bake.

You can serve these cookies with a Cool Whip dip or cream cheese.

Parfait is a popular dessert served chilled and is a good thing to have in summers. Though the traditional parfait recipe uses whipped cream boiled with eggs, sugar, and syrup, you can also use Cool Whip instead of cream.

To prepare amazing shots of parfait, you’d need to blend Cool Whip with eggs and vanilla essence to convert solid Cool Whip into a puree.

Now, layer this puree with sliced/diced fruits of your choice like strawberries, apples, pineapples, blueberries, and so on. Garnish with mint leaves and chocolate chips. Serve chilled.

Cool Whip is an amazing pick to enhance the texture & taste of your desserts. It adds a solid & sweet character to every dish, from cakes to puddings & from cookies to pies.

Additionally, being gluten free, you need not worry about the side effects of gluten discussed above. If you’re wondering what all can be prepared using the whipping topping, we’ve also provided a few quick & tasty Cool Whip recipes.