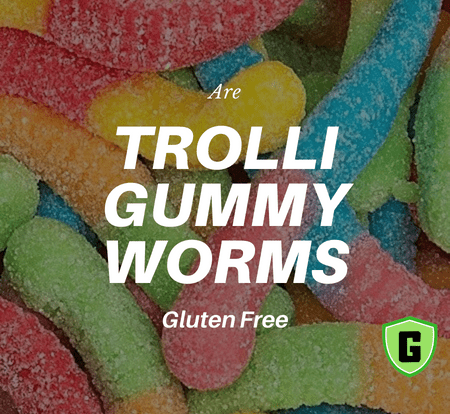 Are Trolli Gummy Worms Gluten free? Let’s face it! Whether you’re a kid or an adult, gummy worms are fun. These are pretty popular among people. Also, gummy worms are one of the highest-selling candies.

These treats are undoubtedly enjoyable; one factor might restrict many from tasting them. Do they contain gluten?

The recent surge in gluten sensitivity has created anxiety among people. The USA has recorded one person in every hundred to have celiac disease. Considering that, it is a severe matter of discussion.

So, in this article, we will provide information about Trolli gummy worms. And will bring up the gluten-free issue.

What are gummy worms, and are trolli worms gluten free?

Gummy candies are available in many shapes. For example, you might find gummy bears, babies, and rings. Similarly, manufacturers make gummy candies in worm shapes or crawler shapes.

These are gelatin-based candies. You can chew these. Generally, these candies are sweet. But some brands produce sour gummies as well.

These gummy candies are made in factories. After mixing all the ingredients (water, sugar, corn syrup, edible gelatin, flavorings), the liquid is cooked into a slurry.

Then, they pour the slurry into shaping molds. That is how they produce different-shaped gummy candies. These are bordered with corn starch for less sticky gummies.

And then, after cooling them, they are packed and sent to stores for selling.

The answer will be a straight yes to suffice.

But wait, before chewing the worm, please read ahead. There’s more to it.

None of those ingredients mentioned above are responsible for gluten. Hence it might sound okay to give it a go.

However, cross-contamination might cause a slight gluten issue, for that matter. Therefore, extremely sensitive people should avoid it.

The manufacturers use wheat flour for the Trolli Sour Brite Bites and twisted crawlers. And wheat is considered one of the primary sources of gluten. Hence there’s no chance you can enjoy these candies if you are gluten intolerant.

Sadly, all Trolli candies are not for gluten intolerant people. We understand your sorrow. Honestly, we hate bearing the bad news!

Certain brands produce gluten free gummy candies. Here’s a list of the sweets that you can have.

This brand is one of the favorites among kids. Some of their gummy candies are safe for people with celiac disease.

The sour patch is another brand that produces candies, especially gummy candies. Their sweets are generally gluten-free. Here are some of the products you can buy.

What are Trolli gummy worms made of?

Trolli gummy candies are one of the most popular ones among kids. As a result, the fan base of this brand has gone to a different level.

However, The gluten presence factor is quite a serious issue to be concerned about. And thanks to the manufacturers, they have invested time and patience to give it a thought.

Therefore, we get gluten free gummy candies from Trolli. Yet, it is always best to cross-check once before purchasing. So, read the ingredient list on the packaging and then buy.